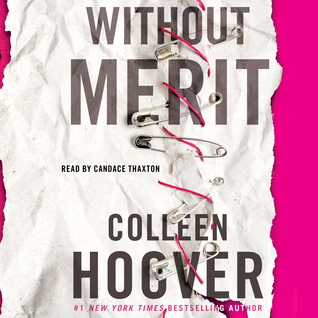 It may come as shock to anyone reading this, but this is the very first audiobook I have ever listened to. Technically I do own a copy of The Celestine Meditations by Salle Merrill Redfield which I have listened to many, many times over the years but I don't really count this because it's never been in a hardcopy book form. I've never listened to an actual audiobook, fiction or nonfiction.
The worst part is, I have been working at Walmart doing a stocking job and have the ability to listen to an audiobook for about 5 hours a day. Most of my hours are after the store closes and I'm able to listen while I work. I've worked at Walmart since the Monday after Thanksgiving of LAST YEAR and am just now trying out audiobooks. Do you know how many books I could have finished by now? It's embarrassing.
I also decided to get a hardcopy version of the book and compare reading it to listening to it being read. What I found was that I read passages way different than they were read by Candace Thaxton. I often read the main character as being entitled and whiny but Candace read her thoughts and dialogue very differently. I found I liked the audiobook version of the characters much more than I liked the book version of the characters. Jokes were funnier. Lucky's accent could clearly be heard which was absolutely hysterical. And things just felt more...dramatic. Candace is a talented actress, which is something I never realized contributes greatly to audiobooks. I always thought someone just read the book. I didn't realize they act out the parts like they are reading a play or script.
The book blurb from Goodreads:
Not every mistake deserves a consequence. Sometimes the only thing it deserves is forgiveness.
The Voss family is anything but normal. They live in a repurposed church, newly baptized Dollar Voss. The once cancer-stricken mother lives in the basement, the father is married to the mother’s former nurse, the little half-brother isn’t allowed to do or eat anything fun, and the eldest siblings are irritatingly perfect. Then, there’s Merit.
Merit Voss collects trophies she hasn’t earned and secrets her family forces her to keep. While browsing the local antiques shop for her next trophy, she finds Sagan. His wit and unapologetic idealism disarm and spark renewed life into her—until she discovers that he’s completely unavailable. Merit retreats deeper into herself, watching her family from the sidelines when she learns a secret that no trophy in the world can fix.
Fed up with the lies, Merit decides to shatter the happy family illusion that she’s never been a part of before leaving them behind for good. When her escape plan fails, Merit is forced to deal with the staggering consequences of telling the truth and losing the one boy she loves.
My review (may contain minor spoilers);
This story and characters was so unique. The Voss family is truly like no family you will ever meet or read about. Some of the characters were likeable and some were not. The main character, Merit, for the most part isn't likeable but this seems to be intentional by the author. Her likeablilty is actually a huge part of the plot. (You'll understand when you read the book.)
As someone who suffers from mental illness, this aspect of the story was dealt with realistically and respectfully. I'd share more details but those would be major spoilers.
Colleen Hoover also avoids overused, romantic tropes. This book absolutely is unique as a romance as well. This is incredibly hard to do in a genre that has thousands upon thousands of books. Don't let the fact that it's a young adult book fool you. It deals with adult themes at times. The book is about Merit having to deal with these themes as a teenager. (Actually, it wasn't even in the young adult section at my library so I'm not entirely sure it is a YA,)
The one thing I didn't like about the book was that there are so many subplots and backstories that often seemed even more interesting than Merit's story. I would love to read a book about Merit's mother and her life before and after the car accident (all backstory). I would love to read how Victoria and Barnaby ended up falling in love and getting married (all backstory). I would love to read about Lucky and his adventures working on cruise ships (all backstory). And I especially would love to read about Sagan's backstory which isn't even revealed until you're near the end of the book. Sagan's story is never wrapped up and actually would make an excellent sequel that I would love to read.
I also would love to see this book as a movie. Rarely do I read a book and think it would work great as a movie (maybe it had to do with it being an audiobook) but this book would. This book made me want to read more by Colleen Hoover.
My rating was a solid