The Year of the Witching by Alexis Henderson Book Review 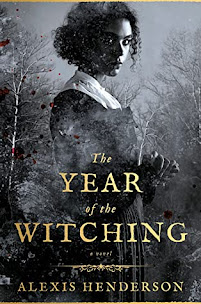 The first book I finished for my WitchyReadathon was The Year of Witching by Alexis Henderson. The genre is fantasy and alternative history. I was so excited to read this book. It promised to be "The Handmaid's Tale for a new generation." That's a lot to live up to.
In my opinion, it completely failed.
Here is the book blurb from Goodreads:
The Handmaid's Tale for a new generation . . .

In the lands of Bethel, where the Prophet's word is law, Immanuelle Moore's very existence is blasphemy.

The daughter of a union with an outsider that cast her once-proud family into disgrace, Immanuelle does her best to worship the Father, follow Holy Protocol and lead a life of submission, devotion and absolute conformity, like all the women in the settlement.

But a chance mishap lures her into the forbidden Darkwood that surrounds Bethel - a place where the first prophet once pursued and killed four powerful witches. Their spirits are still walking there, and they bestow a gift on Immanuelle: the diary of her dead mother, who Immanuelle is shocked to learn once sought sanctuary in the wood.

Fascinated by secrets in the diary, Immanuelle finds herself struggling to understand how her mother could have consorted with the witches. But when she begins to learn grim truths about the Church and its history, she realises the true threat to Bethel is its own darkness. And if Bethel is to change, it must begin with her . . .
My review Without Spoilers:
How do I review this book without spoilers? That's next to impossible. Everything I liked about the book and disliked involves spoilers. So I'm including two reviews. One without spoilers and one with spoilers.
What I can say about this book, without spoilers, is that you cannot call something feminist that has the climax of the book about women fighting other women because of men. The Goddess figure in the book isn't the heroine. She's the villain. Not the main villain, but a villain nonetheless. As a feminist, I was offended. As I pagan, I was indignant. If the whole point is that patriarchy makes women out to be evil when they aren't DON'T MAKE SAID WOMEN EVIL! I don't care how righteous their anger is, no feminist is so angry they are willing to kill other women and children because they're pissed at the men. That's not feminism.
What I did like about the book is that the main character is a female of color. However, this book was a missed opportunity to write an allegory about racism and microaggressions. Instead, Immanuelle never seemed treated differently for being a girl of color, just for being a witch. That’s impossible for me to believe. I just find it impossible to believe this Puritanical community was so backwards about how it treated women and religion but was so progressive about taking in children of color and raising them like their own.
Overall, this book just didn’t know what it wanted to be so it was trying to be everything at once. A witchcraft fantasy about warring witches? An allegory about being female, black, and lesbians in a patriarchal Puritanical society? A commentary on the war between sexes? A reimagining of the Burning Times? A satire of the Catholic religion? A reimagined mythology of the Dark Goddess?
I’m giving the book three stars only because you can’t do half stars on Goodreads. My actual rating is two and a half stars.

Stop Reading Now If You Don't Want Spoilers!!!
My Review With Spoilers:
I hated the first 100 pages and nearly gave up on the book. However, Emmanuelle being given her mother’s journal is what changed the story for me. It became more of a mystery and a search for answers. This part of the story I greatly enjoyed.Some of the story seemed entirely too forced. The initial incident that unleashed the four plagues seemed so utterly contrived that it wasn’t even remotely believable. How would the Coven know that at precisely that time Emmanuelle would start her period? However, they also seemed to know when she would enter the woods to give her the journal so that seemed equally as contrived.And what unleashed the fourth and most important plaque? Something that was supposed to do the exact opposite! What the actual hell? The worst part is the characters just seem to forget that this task was supposed to end the plagues. Vera and Emmanuelle just pretended like this didn’t even happen. Emmanuelle should have been livid at Vera! So you’re telling me the Coven somehow also knew that Emmanuelle would find out a supposed way to end it, would do that, and then once that was done then would be when they show up to unleash their revenge? If they knew that much then wouldn’t they know they were going to lose?And the wonderful feminist aspects of this book are completely and utterly nullified by the idea that Emmanuelle has to fight Lilith the Mother in the end. If the point of the story is that patriarchy suppresses and hurts women why in Goddess name would the VILLAIN BE A GODDESS!? Why are women fighting women? Why the hell would the Coven want to kill everyone in the town and not just the men or the Prophet? You know what. Forget three stars. That final boss battle between two female witches pissed me off so much I’m tempted to downgrade my rating to two stars.And can we talk about how some gay witches and being a girl of color had little bearing on the story whatsoever? Was Emmanuelle the only girl of color in the town? It seems so when she talks about finding her family that looks like her. Did it matter though? She never seemed treated differently for being a girl of color. That’s impossible for me to believe. I just find it impossible to believe this Puritanical community was so backwards about how it treated women and religion but was so progressive about taking in children of color and raising them like their own. As for the lesbianism, this Puritan sheltered girl just shrugs at the idea of women having sex together. Oh come on! And then in the end she lets A PEDOPHILE go because of mercy. A pedophile!!This book just didn’t know what it wanted to be so it was trying to be everything all at once. A witchcraft fantasy about warring witches? An allegory about being female, black, and lesbians in a patriarchal Puritanical society? A commentary on the war between sexes? A reimagining of the Burning Times? A satire of the Catholic religion? A reimagined mythology of the Dark Goddess? The book was just an absolute mess. I’ll leave the third star only because you can’t do half stars on here. My actual rating is two and a half stars.
at August 09, 2020