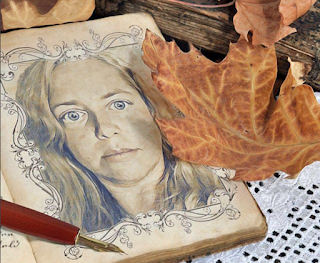 I am a 43 year old bibliophile, aspiring writer, artist, and a widowed single mother of five raging in ages 5 to 25. I live in Indiana with seven cats (five are newborn kittens), a long haired Syrian hamster, and a four month old sheltie/lab mix puppy. I'm also an "essential worker" aka a stocker at Walmart.

I am also a mental illness warrior. I have been diagnosed with bipolar II disorder, borderline personality disorder, and anxiety.

I have been a eclectic pagan and witch for over 20 years. Recently I did a 21andme test and confirmed that my ancestors are indeed Vikings. Because of that I have started to study Asatru. I'm also influence by Wicca, Feri, lightworking, New Age, Christianity, Western Mystery Tradition, Eastern philosophy, and even Jediism.

I'm also a feminist and political junkie. To me, feminism isn't about ruling over men but about not being ruled by them. Politically I'm somewhere between liberal and neoliberal. Moderate is not a dirty word. I like to think of myself as an independent but in all honesty I'm a Democrat.

I'm a modern hippie with a bit if a dark side and have an affinity for hippie, bohemian, and goth and steampunk culture. I don't pretend to understand what it was like in the 60's but I am greatly influenced by the counterculture of that time. Particularly the philosophy and political activism. I'm also fascinated with the modern goth and steampunk culture. The clothes, accessories, art, and music of all three of these cultures are things that I love.

I love arts and crafts. I favor drawing with graphite and colored pencil. I also love crafts, scrapbooking, nail art, and photography. I recently discovered bullet journaling where I can be creative and organized at the same time.

I love books. My number one goal in life is to be a published writer. I call myself a bibliophile because I tend to collect far more books than I have time to read. Being a single parent makes it hard to read as much as I would like.

Honestly, being a single parent gives me a very limited time to work on all these things that I love. I keep a lot of spinning plates in the air...looks down...yeah there's some broken plates down there too. It's hard keeping up with everything that interests me. I'm hoping reincarnation is real because sometimes it feels like I need a dozen more lifetimes to do everything that I want.

Email ThisBlogThis!Share to TwitterShare to FacebookShare to Pinterest
Home
Subscribe to: Posts (Atom)
**WISHING YOU A BLESSED THANKSGIVING!**