If White Pride Knew About Alchemy it Would Blow Their Minds

I was on Twitter yesterday in a thread responding to someone who posted that they are proud to be white. I'm sure it's not shocking when I tell you this person was a MAGA. While she claimed her white pride wasn't about racism but her ancestry, it was a dog whistle for dozens of racist, white pride replies. Some of which were targeted towards "white haters." One particular tweet shared this meme: 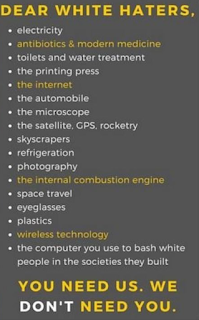 I particularly want to address the concept on the meme "We don't need you." The person who made this meme and all who share it are profoundly misinformed.  What they don't realize is that the building blocks of technology such as language, writing, math, and science weren't discovered or created by white people at all. However, it's not actually because they are racist. It's because our society is. It's no secret that white men are given credit for almost everything. The sad truth is the real history of our world simply isn't taught. It's embarrassing to admit but I wouldn't have known the truth about history either if it were a year ago.
The reason this meme caught my attention is because I've been learning about alchemy this past year. I've learned that if you want to know the true history of anything you must look at the occult. Perhaps that's why it's "hidden" in the first place. There's so much that textbooks refuse to acknowledge. The role alchemy played in the development of modern science is one of those hidden things. I don't know if that's because it's considered the occult, too fanciful, or because it's not about white people. It's probably a combination of all these things.
Who invented language?
While language was part of primitive man, the oldest known system of language and writing was invented by the Sumerians between 3100-3500 BCE. The Sumerians lived in Mesopotamia which is now modern Iraq. The oldest proof of written Sumerian was found in Iraq on an artifact known as the Kish Tablet.
Who invented math?
Again we have the Sumerians to thank. The earliest evidence of written mathematics dates back to the ancient Sumerians. They developed a complex system of metrology around 3000 BC. The Sumerians were the first civilization to have developed a counting system. It is a common belief that some of the oldest and most basic mathematical functions, such as addition, subtraction, multiplication, and division originated with the Sumerians.
Who invented science?
A simple Google search will tell you Aristotle was the "father of science." However, anyone who has studied the occult and alchemy know science existed long before Aristotle.
Alchemy was born in ancient Egypt, where the word Khem was used in reference to the fertility of the flood plains around the Nile. By 332 BC, Alexander the Great had conquered Egypt. With this Greek philosophers became interested in the Egyptian ways and merged many of their concepts including the idea of the four elements. The result was Khemia, the Greek word for Egypt.
However alchemy was something meant to be because it was also developed by the Taoist monks in China as well as India. These alchemists in India even invented steel. While these countries were skilled at alchemy, it was in the 7th century when the Arabs arrived in Egypt and took it to the next level. The Egyptian alchemists had developed advanced practical knowledge in the fields of pharmacology and metal, stone, and glass working. (This means the claim on the meme that white people are responsible for modern medicine is actually false. Not to mention the development of herbal knowledge but that's beyond the scope of this article.) Without these alchemists, chemistry and pharmacology would not have existed.
The Western world was introduced to alchemy by Arabs in the 8th century when they brought it to Spain. Jabir ibn Hayyan is famously known as the "father of chemistry." Muhammad ibn Zakariya Al-Razi work became the basis for the European students of medicine and this led to pharmacology.
The practice of alchemy spread throughout Europe and it was after this that it was developed into what we think of as science. Aristotle may have been given the title the "father of science" but it was the Egyptians, Chinese, Indians, and Arabs that crawled so he could walk and eventually all of the inventors in this meme could run.
Other technological advances included blacksmithing which was invented in Egypt. Egypt was also the first shipbuilders. Nails were also invented by the Egyptians around 3400 BCE and have retained their basic design. Archeologists discovered the oldest known hammer, which dates to the prehistoric age, in Kenya in 2015.
White people clearly did need people of other races, cultures, and nationalities to invent all of the things in the meme. Without the knowledge and work of the Egyptian, Chinese, Indian, and Arab alchemists our modern industry and technology wouldn't even exist. Basic tools and blacksmithing were invented in Egypt and Africa millennia before these white inventors even existed. To give these white inventors credit for all of technology and science is ridiculous. To claim we don't need other races and cultures is downright absurd. We are one race, the human race, and all have contributed to modern science and technology.
at November 14, 2022