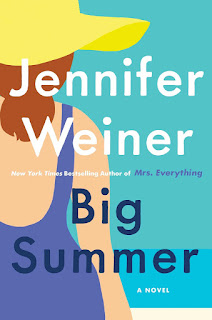 This just might be the first book review I've posted on my "book review blog" in around two years. Let's just take a second to appreciate that. That said, if I'm a little rusty at this, please forgive me.

The blurb for Big Summer by Jennifer Weiner (May 5, 2020) from Goodreads says the following:

Six years after the fight that ended their friendship, Daphne Berg is shocked when Drue Cavanaugh walks back into her life, looking as lovely and successful as ever, with a massive favor to ask. Daphne hasn’t spoken one word to Drue in all this time—she doesn’t even hate-follow her ex-best friend on social media—so when Drue asks if she will be her maid-of-honor at the society wedding of the summer, Daphne is rightfully speechless.
Drue was always the one who had everything—except the ability to hold onto friends. Meanwhile, Daphne’s no longer the same self-effacing sidekick she was back in high school. She’s built a life that she loves, including a growing career as a plus-size Instagram influencer. Letting glamorous, seductive Drue back into her life is risky, but it comes with an invitation to spend a weekend in a waterfront Cape Cod mansion. When Drue begs and pleads and dangles the prospect of cute single guys, Daphne finds herself powerless as ever to resist her friend’s siren song.
A sparkling novel about the complexities of female friendship, the pitfalls of living out loud and online, and the resilience of the human heart, Big Summer is a witty, moving story about family, friendship, and figuring out what matters most.

This story was two different books, as in two entirely different genres. The blurb describes the first half. The first half is a social commentary about frenemies, being rich and connected, and social media while the second half is a...cozy murder mystery? Wait. What? Please note that nowhere in the blurb does it say anything about a murder mystery. The stories on their own are good but together it’s just a hot mess.

This seems to be because Wiener didn’t know what she wanted the book to be. Is it a book about body positivity and self-esteem? Frenemies? Social media? Being rich? Weddings? Romance? Finding a murderer? Finding your family? The answer is yes. This causes much of the story to seem rather forced and the pacing all over the place. The murder, which happens halfway through the book, is completely jarring to the reader.

(This paragraph contains minor spoilers so feel free to skip.) And the part about Drue’s secret life? Sorry I didn’t believe it for one second. Another issue I had was that the main character, Daphne, just wasn’t likable. She really wasn’t any better than her frenemy Drue because she was using her too but is all offended when she finds out why she was really asked to be Drue’s bridesmaid. What a hypocrite! And she wasn’t trying to find the murderer out of the goodness of her heart but just to clear her own name. She also just didn't have a lot of depth as a character. Drue, her best friendm frenemy, and the antagonist, was given more depth. In many ways, the book was more about the antagonist than it was about the main character.

Wiener does do a good job of planting lots of red herrings along the way to make you suspect other people of being the murderer. The main character actually has to do some layman detective work instead of clues just falling into her lap like some cozy mysteries tend to do. Overall I liked both halves of the book (I thought the cozy murder mystery half was better than the women’s contemporary half) but switching genres in the middle of a book? Who does that? It just doesn’t work.

This book was read for my Fun In the Sun Reading Challenge. For more info click here. 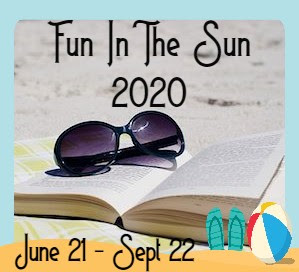