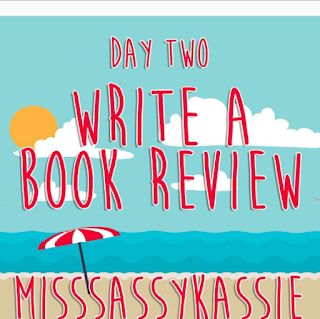 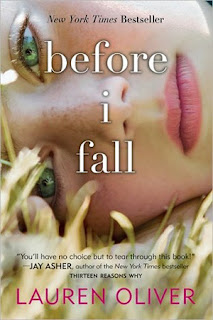 I will be reviewing Before I Fall by Lauren Oliver. I read this book for the 24in48 Readathon.

This review DOES CONTAIN SPOILERS because it's one of those books that are hard to review without mentioning some of the things that actually happens in the book. Also, if you loved this book you might not want to read my review because honestly I couldn't stand it.

The concept of Before I Fall is brilliant. It's Mean Girls meets 13 Reasons Why meets Groundhog Day meets The Butterfly Effect. Here is the book description from Goodreads:

With this stunning debut novel, New York Times bestselling author Lauren Oliver emerged as one of today's foremost authors of young adult fiction. Like Jay Asher's Thirteen Reasons Why and Gayle Forman's If I Stay, Before I Fall raises thought-provoking questions about love, death, and how one person's life can affect so many others.

For popular high school senior Samantha Kingston, February 12—"Cupid Day"—should be one big party, a day of valentines and roses and the privileges that come with being at the top of the social pyramid. And it is…until she dies in a terrible accident that night.

However, she still wakes up the next morning. In fact, Sam lives the last day of her life seven times, until she realizes that by making even the slightest changes, she may hold more power than she ever imagined.

This review DOES CONTAIN SPOILERS so do not read any farther if you want to avoid them!

I am an adult who reads a lot of YA fiction so I know the type of writing used. When I started reading this I felt like I was reading a middle grade book. That eventually changes but the writing itself took a number of chapters to mature.

This wasn't a big deal to me but what was is the character of Samantha. This is what ruined the book for me. I get that she's supposed to be unlikable and the point of the story is how she goes from a shallow, vain bitch into a selfless, caring person but I can't honestly say I ever really cared if she lived or died. I've read characters that I didn't like but I still cared about so I know it can be done.

Speaking of dying, the book description gives the impression that she dies every single time. This isn't true. The clock actually resets to the previous day whenever she either dies or falls asleep. I thought this was kind of a cheat by the author because the day never reset exactly at 12:39 am. Sometimes Sam was able to get extra time and make the day last longer.

Also, how the hell does someone jumping in front of a truck that size make it flip off the road much less burst into flames? I've seen people hit by cars in the movies and on TV and NEVER has hitting a person caused a vehicle to spin out, flip on its side, go into a ditch, and burst into flames. This part of the story was beyond unrealistic. Especially considering whenever she jumped in front of a different car, that car didn't crash.

All of these things irritated me but I it wasn't until I sat down to write this review I realized why I didn't just dislike the book but absolutely hated it. It's because of the way Lauren Oliver treats mental illness. Actually, I should say the way she doesn't. Because the issue is never addressed at all.

Sam is absolutely convinced that she can make everything all better for Juliet by being nice for a day. For one damn day! She knows for a fact that Juliet is going to kill herself but being an idiot teenager who thinks she can handle everything herself, she never once goes to an adult and tells them Juliet is a danger to herself. In fact, at one point she does go to Juliet's parents' house an never says anything about what Juliet is going through. She never once warns Juliet's own parents!

Also not once does Sam stand up to her friends (much less everyone at the party) to tell them to leave Juliet alone and stop bullying her. Instead she tries to save Juliet without telling her friends to stop being the bullying bitches that they are. For most of the novel Sam cares more about her relationships than she does about Juliet. One day she had completely forgot about Juliet's suicide until she saw her at the party!