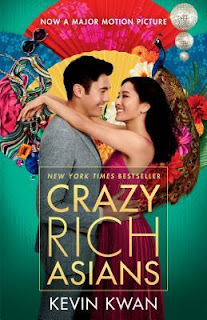 I have not written a book review on my blog in over a year so I'm really rusty at this. I also read the book about a month ago so that doesn't help either. I've never written a movie review before so this is something completely new for me.

Here is the book blurb from Amazon:

When New Yorker Rachel Chu agrees to spend the summer in Singapore with her boyfriend, Nicholas Young, she envisions a humble family home and quality time with the man she hopes to marry. But Nick has failed to give his girlfriend a few key details. One, that his childhood home looks like a palace; two, that he grew up riding in more private planes than cars; and three, that he just happens to be the country’s most eligible bachelor.

On Nick’s arm, Rachel may as well have a target on her back the second she steps off the plane, and soon, her relaxed vacation turns into an obstacle course of old money, new money, nosy relatives, and scheming social climbers.

My Review:
The last time I had to keep this many characters straight was when I read Game of Thrones. I even tweeted this...

I’m reading Crazy Rich Asians and I haven’t had to keep track of this many characters since reading Game of Thrones. I’m nearly 80 pages in and there’s still characters being introduced! #JamJamJar #2019BooktoScreenChallenge #amreading pic.twitter.com/Md69VM3cco
— ꧁༺ ʝʊʟɨɛ ༻꧂ (@juliecornewell) January 2, 2019


It just took forever for any story to actually begin. However, I wasn't bored. I loved reading about this Asian superrich culture. While Kwan didn't pack in much story he blew me away at his world building. This was a deep dive into the culture. As a lower middle class white woman I have to admit I had culture shock. I'm someone who is impressed by Jeffree Star's boujee lifestyle but this was about people that have more money than God. I also wasn't prepared for the control the parents exercised over who their children married.

While there was a deep dive into the culture, there wasn't into the characters. I think this is because there was so many. We don't even get to know the main characters, Rachel and Nick, very well. What disappointed me the most is that while we get to know how they met, we don't see what their relationship is really like. It's clear that Rachel loves Nick with or without his money and Nick is nothing like his snooty family, but I had trouble believing this was a couple in love. Still the main characters are really likable. You can't help rooting for these two because they are morally so different from the other snobby, elitist characters in the book. I also wonder if Kwan knew this would be a book series and knew we would get to know Rachel and Nick over time.

As for the plot, at one point I cared more about what was happening in Astrid's life than I was in Rachel and Nick's. The story also takes a strange turn about two thirds through the book and suddenly becomes a serious family drama regarding Rachel and her mom. I understand plotwise why this happened but it felt so out of place in the book. Once this is somewhat resolved the book returns to its original mood and romantic story. I don't like to give away spoilers so I won't share any of the details.

Overall I really enjoyed the book and look forward to reading the sequels. My rating is

The Movie Review
The movie plot was slightly different than the book, especially regarding Rachel and Nick's mother. The scene with them playing majong was absolutely brilliant. I'm glad the bachelor party location was changed. The characters were all absolutely wonderful and played well. Peik Lin Goh played by Awkwafina really stole the show and was so funny. The family drama between Rachel and her mother was played down and resolved in a touching mother daughter scene. Their resolution wasn't quite so neat and tidy in the book.

Rachel and Nick weren't any more believable as a couple in the movie to me than they were in the book. I just never really saw any chemistry between the actors. The way they did the proposal was really disappointing to me.

Another thing that disappointed me is that there wasn't the same deep dive into the superrich culture. After reading descriptions of the lavish clothes, locations, cars, and private planes I really hoped the movie would show all of this. To be honest, I cared less about the love story in the movie and more about seeing the lifestyles of the families. It just didn't live up to my expectations. The book was about the most expensive wedding in modern history but did they show us this in the movie? Nope. Not even close.

Then again, is any movie ever better than the book? It rarely happens. I expected to be disappointed. I also haven't seen a really good romantic comedy in years. It's kind of a dead genre. 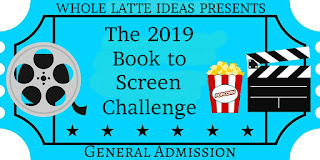 This book was read for my own 2019 Book to Screen Reading Challenge. For more info please visit this post.
at March 05, 2019