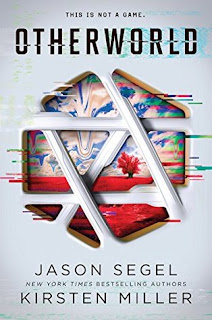 Last year I decided not to do book reviews. That was a huge mistake! What kind of book blogger doesn't post reviews of the books they read? This year I have decided to bring my book reviews back.

The company says Otherworld is amazing—like nothing you’ve ever seen before. They say it’s addictive—that you’ll want to stay forever. They promise Otherworld will make all your dreams come true.

Simon thought Otherworld was a game. Turns out he knew nothing. Otherworld is the next phase of reality. It’s everything you’ve ever wanted.

And it’s about to change humanity forever. Welcome to the Otherworld. No one could have seen it coming.

I started off thinking everything in this book was completely unbelievable but ended up loving it. Segel and Miller do a great job of world building. I liked the characters especially Simon (if I don't like the main character it's game over, pun intended) but I really wish I had a chance to get to know Kat.

However I think the biggest flaw of the book is the timeline. Otherworld is released to a few thousand people that all become serial killing, cannibalistic psychopaths in only a week? That is completely and utterly unbelievable. It would have taken weeks if not months for things to get as crazy as they did.

Did all the Children get created in only a week? Or were they being created while Otherworld was in development?

Where is the paradise part in Otherworld? Another unbelievable aspect of the story was that only psychopaths and perverts were interested in the game. No on wanted to spend all their time in a room full of puppies? Or sliding down rainbows and bouncing on clouds? Or on safari? Visiting Paris or Eygpt? Making love to famous movie stars? Having the perfect home life married to the man of their dreams? Why is it assumed the only thing people are interested in is killing each other and gathering stuff? Did the authors not realize the popularity of The Sims? Did they think the only people that are gamers are interested in World of Warcraft or Grand Theft Auto? I suppose the other things don't make a very exciting book, do they?

Honestly, this book was probably more like a three star book but despite the plot and setting flaws it was written so well that I enjoyed the entire thing. I do love a guy who will do anything to save the one that he loves. And fighting off cannibals is pretty impressive.

Too bad we don't know Kat's story about fighting off all the cannibalistic guests and children. Hopefully book two will tell more of her story!