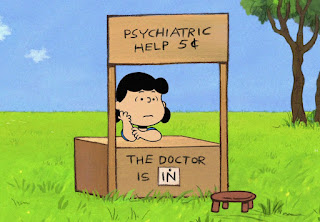 Life has been kicking my ass lately and I haven't been blogging. I won't really go into detail but it is essentially a family drama and crisis that has resulted in me going to start new therapy. That can't be a bad thing, right? I'm sure I'll have lots to blog about once I start therapy.

They have the most generic name ever which is a little concerning though. They are actually called Quality Therapy. I feel this is just slightly off from calling your practice Psychiatric Help like in the Peanuts cartoons.

Maybe they were partners and couldn't agree on whose name to use, so decided to use something neutral? Or I suppose they put their consumer promise right in their title so maybe it's to evoke confidence?

If I were going to hire a hooker would I feel better hiring Trixie's Tricks or Quality Sex? Come to think of it the first name sounds more like the name of a clown who does children's parties. So I would definitely go with the second one. I would at least know exactly what the service was. I have no idea why I'm using this as a metaphor.

Now that the initial crisis is over I'm trying to get back into my routine. Life still feels very much fucked up and I'm still processing much of what has happened. That's so vague, right? I'm sure you are wondering what the crisis was.

I still won't tell you but I will say I do need to seek therapy to work through that television remake of Dirty Dancing. Thanks ABC for ruining my favorite movie as a teen. I actually tweeted while I watched a stream of the movie. At first I was disappointed that I didn't get to hate-watch it with the rest of America, but it turns out watching the stream later had a few benefits. First, not a single commercial! Second, I could pause and tweet instead of trying to hurry and get my tweets done during the commercials. Third, I could take screenshots which I used in my tweets. These are the times that I love technology.

I'll let you know in a future post if Quality Therapy lives up to it's name. Although I suppose now I need to change my name for the blog series My Self Help Journey because it's not "self" help anymore. That's also probably a good thing because I'm about as qualified for helping myself as Lucy is for giving out "psychiatric advice."
at May 25, 2017