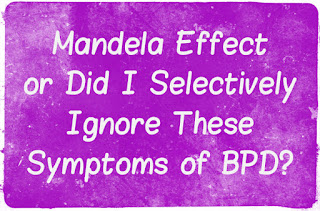 
I ask this because today I came across a tweet with this photograph that lists these as the symptoms of BPD: 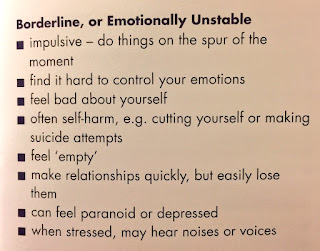 by Royal College of Psychiatrists

Yet these are the symptoms I have always been familiar with along with chronic emptiness (which isn't on this list): 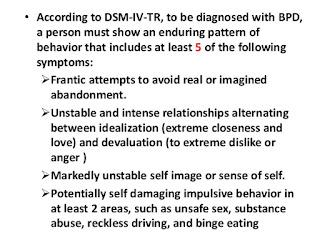 My research show these are actually the full list of symptoms of borderline personality disorder:

When I saw these my reaction was:

Why? Because I honestly don't recall reading about transient paranoia and hallucinations in any of my borderline personality disorder books or seeing it any of the research I have done over the years.

So I decided to check my favorite book on BPD, Sometimes I Act Crazy: Living with Borderline Personality Disorder by Jerold J. Kriesman, M.D. and Hal Straus, to see if I was experiencing a Mandala Effect and these symptoms have always been listed.

Turns out they have and I have a selective memory about them. It indeed lists the symptoms of "transient, stress related paranoia." The entire Chapter 10 of Sometimes I Act Crazy is about reality distortions, paranoia, and dissociation. I even have passages highlighted in this chapter yet have no memory of paranoia and hallucinations being part of BPD. So ironically, since selective memory is also a symptom of borderline personality disorder, my BPD literally prevented me from having memories about the symptoms of BPD.

What exactly is transient paranoia?
It turns out my lack of knowledge about these symptoms of BPD isn't unusual. Stacy Pershell in Psychology Today says this:

It wasn't until I read the diagnostic criteria for borderline personality disorder that I saw the word used in a clinical, nonjudgmental context. Criterion nine in the DSM is "transient, stress-related paranoid ideation or severe dissociative symptoms." At the time, this criterion was overshadowed by the more urgent and distressing criteria - the frantic efforts to avoid abandonment, the eating disorder, the suicide attempts. I took note of the word "paranoid," but I didn't dissociate, so I didn't give it much credence. I was more worried about whether the lover du jour was going to leave me.

I do have issues with dissociation but I never thought of my feelings that people are trying to intentionally emotionally hurt me as "paranoia." When I look back though, I realize this is indeed what they were. When in stressful situations I tend to believe people are out to get me. Just as the word "transient" implies, these feelings are only temporary and only occur under emotional stress.

However in the last month, I have been dealing with a different kind of paranoia. I've been having feelings that people on social media are rooting for me to fail and even secretly working against me. These happen even when I'm not under immediate stress. I've never experienced anything like this before. At it's worst it was terrifying and I actually started to worry that I needed to add schizophrenia to my diagnosis.

It turns out it has always been a symptom of BPD. Since I had never experienced this kind of thing before it never occurred to me to research paranoia. It's almost like I was meant to see that tweet about paranoia being a symptom. While I do experience the feelings of people being out to get me in personal relationships, this is always with people I know and during a fight or disagreement. I never looked at it as paranoia since I knew them. It wasn't until recently that I began experiencing the belief that complete strangers are secretly working against me and started to consider I'm suffering from paranoia.

What about hallucinations?
I decided to consult Sometimes I Act Crazy again. It says distortions involving all five senses may occur. You may feel frightening distortions in perception such as perceiving that you are poisoned, infested by bugs, or perceiving gas smells that aren't really there. Unfortunately this is as in depth as the book goes. However, Stacy Pershell's article in Psychology Today that I quoted from earlier, lists different hallucinations and distortions in reality that other borderlines have experienced.

Personally I have ongoing issues with two things. I often imagine smells that aren't there and when driving at night I think people are flashing their brights at me when they aren't. To be honest, the smell thing is actually kind of nice at times. I'll be in a parking lot and suddenly smell cookies. However, sometimes it's not so nice. Yesterday I sensed the public library had the smell of sewage. It was so strong I was tempted to ask someone else, "Do you smell that?" but didn't because I was afraid it was just my BPD acting up again.

I did some research on these hallucinations and found which Psychiatrist: Update which says:
Clinicians consider the perceptual experiences reported by borderline PD patients as’ hallucination like’ experiences or as ‘pseudo hallucinations’...ie there is limited consensus on the nature of these symptoms. It is generally thought that psychotic symptoms in BPD are short-lasting, less severe, and qualitatively different from those in psychotic disorders such as schizophrenia.

I'm not surprised that information about paranoia and reality distortion in BPD isn't focused on. Borderline personality disorder is primarily viewed as causing issues with unstable emotions, rocky relationships, and fear of abandonment. However, for people like me this cliche is quite frustrating. Personally I don't fall under what is considered a classic borderline. I've never self harmed. I've never attempted suicide. I don't struggle with fear of abandonment. I'm a quiet borderline. Most of what I experience is internal and mental.

Who am I?
While I certainly have a roller coaster of emotions and anger issues, my primary struggle with BPD has been with my identity. To say I have an unstable sense of self is an understatement. This is the first time in several years that I have only had one blog, one Twitter, and one Facebook page. Before this I maintained several blogs on different subjects and even had different corresponding social media. I had a blogs, Facebook pages, and Twitters on feminism, politics, parenting, writing, book reviews. mental health, and spirituality. I was never pretending to be someone I wasn't. I just decided to compartmentalize those different parts of myself.

However, trying to maintain these different media outlets was time consuming and mentally exhausting. I was a chameleon. I was still me but I'd mirror certain aspects of the role while ignoring other parts of myself. For example, if I wanted to discuss something about parenting I would log out of my book review Twitter and log into my other account about parenting.

It got to the point that I couldn't say which one was mostly the real me. Am I the feminist? The writer? The mom? The spiritually minded hippie? The book reviewer?  I realized the only way to find out was to get rid of all these different blogs and social media and maintain just one.

Since I've just started this blog and social media, I don't yet know which of these different aspects are mostly the real me. It's an adventure of sorts. I think it's a sign that I'm reaching a healthier place when it comes to my identity. It also makes me more conscious about how I treat people especially since decided to use my real name. Tweeting an insult at someone feels a lot different when you're not hiding behind an anonymous fake name. But since I have BPD it's a constant struggle to react in a sensitive, mature, and polite way. I act like a complete bitch at times. I have a tendency to troll people I don't agree with. Those DBT skills really come in handy on social media.

I know I veered off topic towards the end of this post but that's something that is so frustrating about borderline personality disorder. There's so many different symptoms and issues a borderline has to deal with.
at April 24, 2017